Just a quick round up to say I had a fantastic couple of launch events in Birmingham and London last week to celebrate the publication of Mageborn.

In Birmingham, RJ Barker and I were quizzed by Tom Bissell about magic, writing, our influences, and all the while we and the audience enjoyed a nice glass of MAGE real ale brewed by Fownes Brewery with help from myself. Below are some photos from the evening’s entertainment, which also included a brief game of Bluff my Call (not related in any way to a TV show that had a similar name). 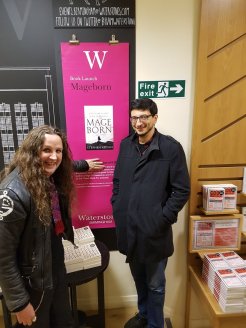 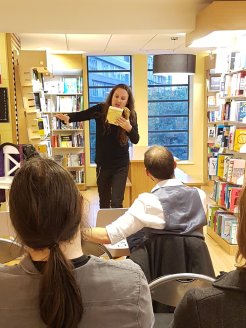 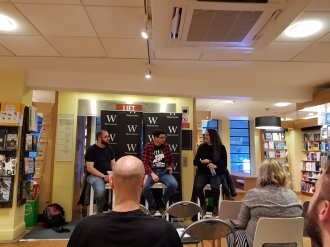 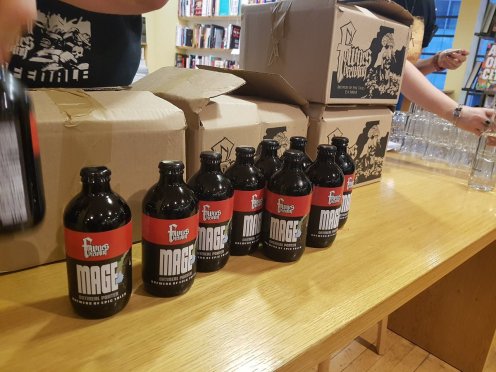 In London I sat down with Ed Cox to have a more intimate one on one chat covering a wide range of topics ranging from our origins, the place where we write every, our parents, influences, world building, magic and exciting books we were looking forward to seeing in the coming months. It was a lot of fun to dig into each other’s origin story and to chat to some new people afterwards.

It must have worked as they’re both smiling

Later this month I’ll be taking another trip down south for the MCM Comic Con at the Excel Centre (October 27-29th) so if you’re in the area come along, say hello and get a book signed.

Comments Off on Mageborn launch events

It’s that time of year again. It’s time for me to go away for a week’s holiday in the sun. I’ve been saving up some books, hoarding them to enjoy at my leisure without distraction or interruption for hours on end. I’m also taking some books I’ve heard a great deal about and want to try, so reading them in the sun beside the pool is the ideal time to soak into some new worlds by writers who are new to me.

I typically take 5 books for the week and usually get through most of them. I’m also going with one book in hand so 6 in a week is pushing it, but we’ll see. It depends on the flight, the heat, interruptions, how easy/difficult it is for me to get into the book and so many other things. This year I will be reading the following. 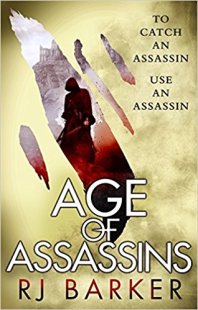 Age of Assassins by RJ Barker – I was lucky enough to be sent an ARC by Orbit, so I’m currently reading this at the moment. I’ve met RJ a few times at events over the last couple of years and he’s a very nice guy with a dark sense of humour which appeals to me. This is his debut which is due out in August. Assassins, intrigue, twisty turny plots, comedy and, slight spoiler for chapter 1, night soil! I’m two chapters in and I’ve laughed a few times already which is a very good sign. Fans of Robin Hobb and her assassins books should definitely take a look at this. 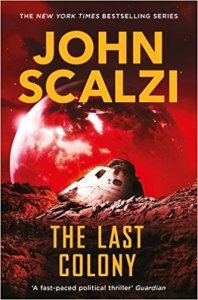 The Last Colony by John Scalzi – I’ve not read many of his books and this is only my third. I’ve seen he is very popular in America but I stumbled across him by accident when I was after some interesting, character focused SF and a friend recommended him. This is the third book in his Old Man’s War universe, and the books are super lean. I mean the prose is so tight and sharp you could cut yourself on it and it reads like an old school pulp novel. That’s not a criticism at all, I love the style and it’s a funny, creative and clever read. Really enjoyed the first two so this is a nice comfortable read that I know I am going to enjoy. 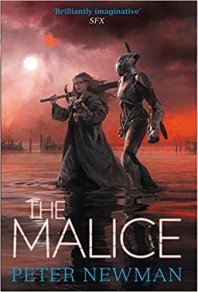 The Malice by Peter Newman – Peter’s first book in this series, The Vagrant, is a great book but the main character can also be divisive because he doesn’t talk. At all. That seemed to annoy some people but I thought it was a very interesting and different approach, and that’s what I want in a fantasy book, not another me-too product. The story is a mix of SF, fantasy and horror, set in a sort of post-apocalytic world with demons, magic swords, a goat and plenty of weirdness. It took me a little while to get used to his writing style which is very staccato at times, but once I settled into it the pages flew by. I’ve been saving this one for a while so I’m looking forward to getting my teeth into it and seeing how the world and characters have developed since the first book. 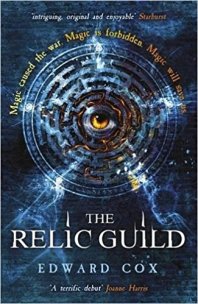 The Relic Guild by Ed Cox – This sounds like such a corker of a book. I’ve been hanging on to this one for a while and can’t wait to read it in peace with no distractions. A lush detailed world. High concept fantasy packed with ideas. action packed and fuelled with magic. Count me in! I’ve known Ed for a few years via conventions and there’s always that embarrassing thing where you meet a fellow author and feel bad for not having read at least one of their books. The problem is there are so many books I want to read now and just not enough time. There’s also the issue of  – what happens if you don’t like it? What if they ask the next time you meet up? What do you say? I’m very confident that I will love this book but even if it wasn’t for me Ed would just shrug, say fair enough and that would be the end of it. He wouldn’t go away to plot my downfall, he’s one of the nicest, warmest authors I’ve ever met. Smart as a whip too, don’t you know, he used to lecture in creative writing so he knows his apples. 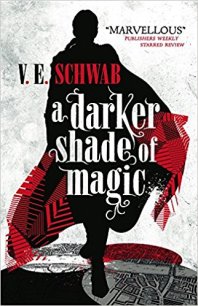 A Darker Shade of Magic by VE Schwab – This is the wildcard for me. I’ve never read a book by this author before, but there again, I’ve heard very good things. I recently listened to an interview with her on a podcast and I was so impressed I immediately picked up this first book in the series. This sounds like a very creative and inventive novel with some fantastic ideas. People always ask authors where we come up with ideas. What I find remarkable when reading other people’s work is that I know I would never come up with an idea similar to theirs. Those are the kind of books I enjoy reading the most because it’s so unfamiliar. Different versions of London. Magic. Flawed and well realised characters. 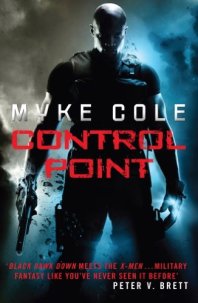 Control Point by Myke Cole – This is the second wildcard book for me. A new author to me but once I’ve seen and read a fair bit about. Soldiers with powers. Black Hawk Down meets X-Men. Written by someone who has served in the armed forces, so he knows what he’s talking about, with a huge dollop of creativity. Sounds very intriguing. Again, this is something I’d never write myself so I’m curious to see how he builds the story and the world. High action, fast paced and thrilling is what I’m expecting.

Comments Off on Holiday reads 2017

Tagged as A Darker Shade of Magic by V.E. Schwab, Age of Assassins by RJ Barker, Control Point by Myke Cole, The Last Colony by John Scalzi, The Malice by Peter Newman, The Relic Guild by Ed Cox