Something to keep you occupied during lockdown.

Sleeper – This is still one of my favourite series of all time. It’s gritty and sometimes grim, but not overly so but it’s definitely not a comic for children due to the adult content (violence, swearing, sex etc). It’s about a guy who has some powers (no capes, no tights) that are kind of low key but useful and brutal, going undercover in a criminal organisation. It’s espionage with an edge as there is the constant fear that he could be discovered at any time and the repercussions if that happens will be very bad. It’s two seasons, well 2 x 12 issue trades. Self contained and an excellent read. Amazon UK 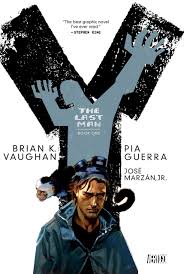 Y: The Last Man – Only slightly close to the knuckle given the current situation, however, it’s still worth your time. A virus wipes out every male on the planet except one guy, Yorick, and his pet monkey. It’s about his journey across America in a strange new world. Yorrick has lots of interesting and thought provoking adventures. This 10 trade paperback comic book series is also in development to be a TV series, coming maybe 2021 given changes to scheduling and so on. Amazon UK

Joyride – A fun sci-fi comic about a girl living on Earth during a particularly difficult time who just wants to get out and explore, have fun and find out what’s going on in the wider galaxy. So she steals a spaceship because Earth sucks, and together with two friends, goes off to have some adventures. It’s that simple. It’s fun, brightly coloured, not too heavy, but it’s sometimes emotional, often funny, and the whole thing is only 3 trades long from start to finish, so it is a self contained story with a satisfying end. Amazon UK. 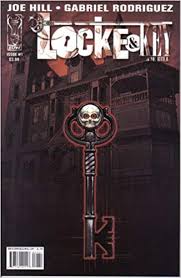 Locke and Key – You’ve probably heard about this because of the TV series, however, as with many things, the source material is better. The TV series crams a lot of stuff in and picks bits and pieces from across the whole 6 trades. This comic has more time and space to explore areas, take it’s time, sets things up gradually and creeps you out. When the TV show was first being advertised I spoke to a few people who thought it was a teen drama or YA series, and I can see why but the comic book is definitely not. It’s a lot more brutal than the TV series, scarier at times and it will creep you out. Also it is also a self contained story. The TV series is going off in its own direction, so even if you are watching you’ll get two different stories. Amazon UK.

Mister Miracle – This is a 12 issue, self contained story. While it is part of DC comics, you don’t need to know much about the character or the series beforehand. You don’t need to be a fan of superhero comics because it’s not about that. At all. I’ve spent hours with friends discussing this book. I’ve done a whole podcast on it where 4 of us talked about the themes and ideas being explored in it for over an hour and barely scratched the surface. The book is fascinating and it is the kind of thing you can reread and will get something different from it every time. If you want something to spell everything out and  give you all of the answers, then this isn’t that kind of book.

Very simply put, imagine if the Devil and God each had a son, and to ensure a form of peace between the two warring empires, they each raised the other’s son. That’s the basic premise. Scott Free, aka Mister Miracle, was raised in a hellish dimension by Darkseid, the epitome of evil. At the same time Orion was raised by Highfather, the epitome of pure goodness, in the equivalent of Heaven.

This story takes place years later when Scott is an adult. Scott has done it all. In the past he’s been a superhero but now he and his wife are just trying to live a quiet life on Earth. He’s a professional escape artist and celebrity. The story is about family. It’s about being an adult. It’s about faith and destiny. It’s about being a parent, but also being someone’s child and the expectations that come with that. It’s about freedom and choice. It’s about a hundred other things that I don’t want to spoil. It’s also an action and adventure story with a war, and duty, and honour. It’s a family drama with real weight and consequences. It’s also hilarious at times and very emotional and terrifying.

It’s one of my favourite comic books of all time. Read it. You can thank me later. Amazon UK

If you read any of them, get in touch and let me know what you thought or send me 5 comics you think I should read (self contained stuff only please).