Last weekend was the super busy London MCM Comic Con. For those who’ve never been it’s a massive event at the Excel Centre in London with tens and tens of thousands of people in attendance. I’m always amazed at how many people attend and again it was slightly overwhelming to walk through the vast crowds, many of who were dressed in cosplay. I’ll be honest, I didn’t recognise about 50% of the cosplay because many of them were from anime, computer games I don’t play (you can tell how old I am because I still call them computer games!), comics and other things I’ve probably never even heard of. Even so it was amazing to see the time and effort that people had put into their costumes. I saw several women with fairy-like wings that moved independently with some sort of motor. Very clever and creative.

Both Marvel and DC had a presence at the show this year. Marvel had taken over a whole section and had lots of cool things you could do, as well as see, including some costumes from the Thor Ragnarok film and forthcoming Black Panther film. There were also some cool statues of Captain America, Spider-man, Iron Man and the Hulk. 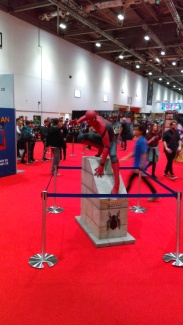 Hela, the Goddess of Death

Thor without his hammer

When not mooching around the show trying not to buy everything I went to a couple of talks and was delighted and charmed by Hayley Atwell. She was funny, warm and spoke about her time on the Marvel films and Agent Carter with great affection. It was wonderful to hear about how her relationship with various actors, such as Chris Evans, had developed over time as they’ve now worked together in the same universe on several films.

I was also on a few writing panels during the weekend alongside other science fiction and fantasy authors. Below are a few photos from our panels ,as well as Ed Cox attempting to get everyone to put on a serious author face. Without a doubt the funniest panel during the weekend was one moderated by RJ Barker. The audience, and everyone  on the panel, had no clue what was about to hit them and it was hilarious. Ben Aaronovitch was in tears several times and Guy Adams had a few funny rants.

Everyone work on your serious author face

Leila, Ed, RJ and myself on Saturday 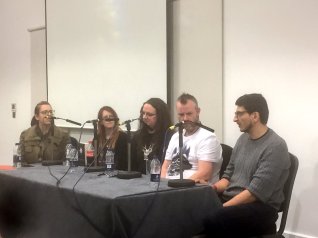 Leila, Lucy, RJ, Ed and myself on Sunday 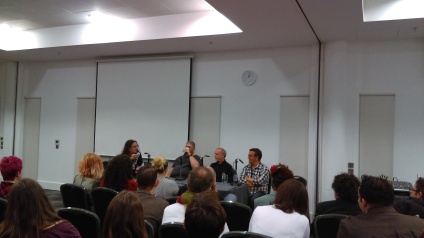 RJ’s panel that went a little off the rails

The weekend was a lot of fun. I got to spent time with some old friends, met a few faces and came home exhausted but happy. I must thank Travis from MCM for inviting me back again and maybe I’ll see you at the next event, which is the one day Sledge-Lit festival in Derby on Saturday 25th November.