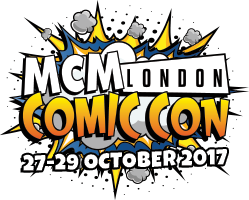 The title says it all really. This weekend I will be attending the MCM London Comic Con alongside some other fantastic fantasy and science fiction authors.

The event is 3 days but my fellow authors and I will be appearing on panels and doing signings on Saturday and Sunday. After each panel there will be a signing with books for sale in the room for all of the authors appearing on each panel.

Apparently, as well as authors, there are some other guests attending the event! Who knew? People like Anthony Mackie, Hayley  Atwell, Manu Bennett, David Bradley, Andrew Scott, Julian Glover, three of the boys from Red Dwarf…the list goes on and on. There’s going to be tonnes of cosplay, comics, Marvel have a big presence there this year, video games, manga, the list goes on and on.

In May this year at the event they had a footfall of something like 110K people over the three days making it the biggest convention in the UK. I wonder if they will exceed that number this weekend?

Check out the Author corner for the full list of authors attending and keep an eye out for the panel schedule in the Platinum suite. See you there, and if not, next month I’m in Derby at Sledge-Lit on Saturday 25th November, but more info on that soon.