I’ve not done one of these in ages, and I’m not really sure why. I’m busy but I’ve also still been regularly drinking real ale, so I’ve no real excuse. Now I’m at the point where I look at the shelves in my local shop, farm shop, supermarket and say ‘ Have I tried that one?’ and I’m not really sure. So this is now becoming a personal record as well!

So, my first real ale post  in a while and it is my favourite type of ale – a porter. 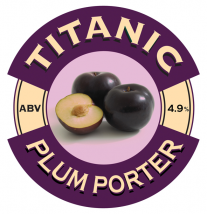 “This beer is dark strong and well rounded; the richness of such a rotund beer is brought to an even keel by the late addition of Goldings hops and natural plum flavouring. Take the opportunity and go for the low hanging fruit, this sumptuous beer really is a plum!”

This is a rather special porter. I will say right now, I don’t like fruit beers, that is any that say ‘a hint of citrus’ or ‘a zesty finish’. They are just not for me. If I’m browsing in the shop and I see that on the tasting notes, it goes back on the shelf. Orange, lemon, lime, grapefruit in a beer are not for me. I’ll have the fruit and the beer separate. So, having said all of that, a fruit porter. My initial response was to put it back but it’s not citrus and I’ve had coffee, toffee, liquorice and smoky porters, but never a plum porter.

This is a really tasty beer. It’s not zesty, but also the plum taste is very clear. You can smell it and the colour is a rich purple when you hold it up to the light. And I’m delighted to say it really works. The ale has a slightly bitter aftertaste, more than I was expecting, but it’s not unpleasant. Also at 4.7% it’s not too heavy at all and could make for a good session ale. It has won several awards over the years and I can see why. A really pleasant surprise and much tastier than I was expecting.

The Plum Porter is brewed by Titanic brewery based out of Stoke on Trent which was founded in 1985. So it’s relatively new, if you can count a 30 plus year old brewery to be new these days. There is a lot of information on their website about them and all of their beers, including a chocolate and a vanilla stout, and a cappuccino stout! They’re not a brewery I’ve come across before but since moving to a different part of the country the local shops stock all sorts of new beers. I will definitely try another of theirs in the future and keep an eye out for their stouts.