I’ve not done of these in a while. So for those who are new to the website, as well as posts about writing, I also write about comics, TV, films and real ale. 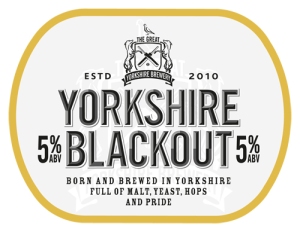 “We’re right chuffed with our porter. This 18th century London beer style is brewed with 100% English ingredients and showcases the delicious flavours of chocolate and vanilla – by ‘eck it’s addictive.”

As I’ve probably mentioned once or twice before, I’m a fan of tasty porters. I find most stouts too heavy and too strong and I need a lie down after one, but porters lay somewhere in that nice middle ground on the ale scale.

This is another old style modern real ale, from an 18th century recipe. One of my other favourites, Black Gold from the Copper Dragon Brewery in Skipton, is another of those ye olde discovered recipes and there is some common ground between them in terms of taste. Yorkshire Blackout, as the name suggests, is completely black like a pint of Guinness but it’s not a heavy drink and it’s very different in texture, plus it doesn’t have much of a head. Strong flavours of chocolate come through immediately and it took only a few sips for the after-taste of vanilla to come through as well. It smells of vanilla but it’s not overpowering, so it doesn’t taste like you’re drinking a melted lump of ice cream. The balance of flavours is actually just right for me, not too bitter or sweet, and despite being 5% it was still a very fresh and tasty drink. It’s the kind of pint I’d have with a traditional hearty meal, like a steak pie and chips or bangers and mash.

The Great Yorkshire Brewery (previously Cropton Brewery) which is located in Cropton was founded in 2010 and they offer a range of beers from lagers to porters but also ciders. There are still Cropton beers on the website so they might be offering beers under the two brands or in the middle of a transition. They do offer brewery tours of their facilities and more information is available via their website. The brewery is also producing seasonal ales using local produce starting with Lavender Blonde this August using local Yorkshire lavender.

Take a look at their website as it has more information about their beers, forthcoming events, an online shop to buy beer and merchandise and the latest news on their blog. Earlier I mentioned matching beer to food and there is also the opportunity to buy a Beer and Food Matching evening as a gift via their website. I think this is a brilliant idea and I’m seeing more of this sort of thing being offered all over.