Flux, a SF thriller, is a comic book mini series that I have been working on for years. Most of the time, when writing a novel, you’re doing it on your own. Other people get involved later in the process (agent, editor, copywriter etc), but with comics it’s totally different. It’s a joint effort almost from the start.

I originally came up with the core idea for Flux and it kept going around in my head but I couldn’t get it to work. Something was missing. I started chatting to a friend, Pete Rogers, about it and suddenly everything clicked. We started writing it together, even doing it in person in the same room at one point, which was a weird and rare experience. We broke the story into 4 issues and then we were off. A little while later we found Maysam, the artist, and as you can see from the art below, he’s rather talented!

We’re just about ready to launch the Kickstarter for Issue 1. It will be live in the next few days, but you can register your interest here with Kickstarter so they will tell you the moment it begins.

Issue 1 is completely done and ready to go. You’ll get your hands on it the moment the campaign ends. The art for issues 2 and 3 is also completely finished, so we just need to colour and letter those. We also have some exciting ideas for extras for those issues, but it all depends on how this first issue goes.

What is Flux about?

Here’s the set up – In 1973 the US government invented time travel. The technology was leaked and Time Terrorists began remaking the present by unravelling the past. To fix this a new branch of government, Purity Control, was created. Their timeband technology protects an individual’s timeline from being altered. By law, everyone is required to wear one from the moment of birth to death. The story takes place in the present day where Detective Sarah Ramirez takes on an unusual homicide case that makes her begin to question everything she knows. 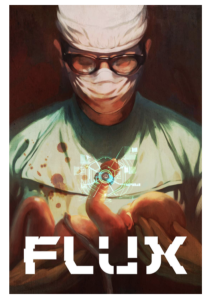 So that’s it. Flux will be going live in the next few days. We’ve got a range of different rewards, with digital comics, physical copies of the book, as well as some other behind the scenes extras and cool features. If you want to know and would like to support this Kickstarter you can register here.

We’ve received some great feedback and praise from comics industry pros who have already read a preview of issue 1, so look out for those too on Twitter. Here’s one from comics superstar, Mike Collins.

“Smartly using the familiar framing of a Police Procedural, Flux introduces us to a world like our own but with a serious twist: Time Travel is REAL. Time Terrorism is real. Echoing the best of Fringe and the X-Files the team take us in a world we only think we understand. Fantastic.”

If you’re on Twitter you can stay up to date with the campaign by following FluxFi and if you like the sound of the book please register your interest. Thanks!