I’ve not posted in a bit as ever since I came back from WFC I’ve been pretty busy with various projects. So just a quick round up of what’s going on at the moment.

The game is still in the testing phase, I just received a message to download another version for me to play with. So it’s still moving forward which is great, and I’m 99% it will be out next year. More info when I have it.

The day after I got back from WFC I received the next round of edits from my agent on the novel. So I’m currently hip deep in them, whittling, chopping, refinishing and polishing for all I’m worth. Lots of massaging stuff, trimming out extra bits that, at the time I thought were cool, but now they’re just extra weight and they slow down the main story. Not sure how long I will need for this, but I’m aiming to get it all done before the Christmas holidays so I can switch off this part of my brain for a few days. 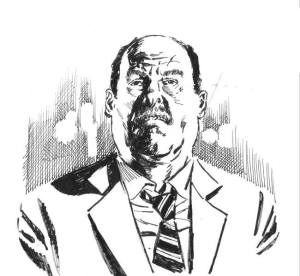 Apparently not content with the number of existing comic book projects I had on the go, I approached my co-writer on Flux, Pete Rogers, with another idea. We bashed it around, whipped it into shape and then approached an artist we’d both been chatting to for a couple of years via social media. We told him about the idea and what we wanted to do with it, and that was it, he was onboard. He’s currently working on another project, but that hasn’t stopped him from doing character sketches for us in his spare moments. So I’m delighted to say Pete and I are now working with Near Death artist from Image comics, Simone Guglielmini. So, above is a rough character sketch from Simone for a cop called Killian. At this early stage I can’t share too much, but I can say it’s a creator owned action thriller mini series written by Pete and myself. We’ll be submitting it to publishers next year.

Flux, the second project co-written with Pete is still moving forward. Our artist Maysam is busy working on issue 1. I previously posted a part of artwork so dig back through previous posts for that if you want to see it.

Comic project 3 – This is the new project with Adam Bolton. Very early stages. We bashed around various ideas until we settled on something we both liked. It’s wacky, weird, and a lot of fun. Currently waiting for Adam to come back with some preliminary sketches. Thought Bubble, the comic book convention in Leeds takes place in two weeks, so I’m hoping to have a catch up in person with Adam who is attending the event for the first time.

Comic project 4 – This is a supernatural crime mini series, and again, I’ve developed it to the point where the artist attached is now working on the cover for issue 1 and the first 5 pages to create a submission packet. We’ll be submitting this next year to publishers.

So, as ever, there are lots of things ticking along and I poke various projects to keep them all moving. Also a couple of other longshot, long-term projects are ticking along, but right now most of my spare time is focused on the novel, getting my head back into that space, going through it at a micro level but also a macro level. Stepping back and saying, does this make sense? Does this flow? Do I really need this or do I just want it? Lots of angst, chewing my nails and anxiety. Fun!