Earlier this week I was one of the hosts on a new podcast I’ve mentioned in a previous post, Bags of Action. I love action movies, so every month a group of people get together and talk about an action movie and then everyone gives it a score. In the first episode we talked about Blind Fury and in the second episode we discussed the 2011 film, Haywire, which stars Gina Carano in the lead. You can find Bags of Action of iTunes if you want to listen, but in short we had a number of issues with the film. However, we all agreed that Gina Carano was the best thing in it.

What came out of that discussion, and a couple of other places, was that with the runaway success of The Expendables and its sequel, and they have already announced plans to make a third Expendables film with Nicolas Cage coming on board, who would you cast in an all female equivalent of The Expendables?

Below are a list of names which are either suggestions from Kim Curran, who I chatted to about this over Twitter, or my own ideas. With each new Expendables film they’ve increased the number of stars in the cast, so let’s pretend there is no limit to how many we could have. So who would you cast in such a film and why? 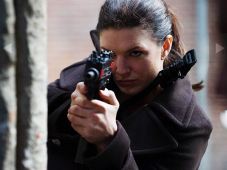 Gina Carano – We all agreed on Bags of Action that she was amazing in Haywire. You knew that she was doing most (if not all) of her own stunts and every fight scene was her and not someone else. You completely believed that her character Mallory was someone who was very capable of looking after themselves in any situation. No doubt it comes from her own physicality, because of her MMA background and even her time on American Gladiators. Cheesy as the TV show might be, as was the British equivalent, all of the gladiators were fit and athletic people. 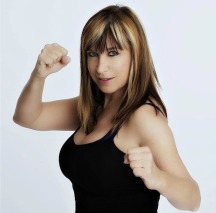 Cynthia Rothrock – She is a veteran of dozens of martial arts films and undoubtedly would fill the Sly Stallone role in The Expendables, perhaps pairing up with Gina Carano, as Sly pairs with The Stathem. Although she officially retired from action movies, many of her contemporaries (Norris, Stallone, Schwarzenegger, Van Damme) have recently returned to major action roles after many years away. So perhaps someone could persuade her to come back if such a film were ever made. 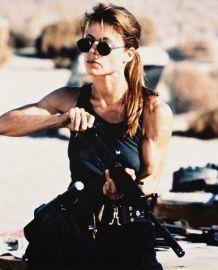 Linda Hamilton – Unashamedly I’m a big fan of the Beauty and Beast TV series from the late 1980s starring Linda Hamilton and Ron Perlman. It was must see TV for me growing up, and I then saw her next in The Terminator. It was only after seeing her in T2 that I had to completely reassess my view of her as an actress. Gone was the gentle, softly spoken, curvy, kind and caring person and in it’s place was this tough, stringy, cigarette smoking, gun-toting, driven and determined soldier. I like T2, despite being very silly in places, but if you look at her role in T2 in isolation, it’s powerful, disturbing and believable as someone who has been locked up because of her delusions about killer robots from the future. 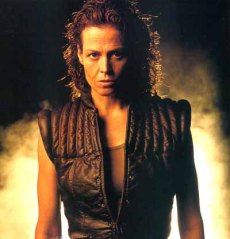 Sigourney Weaver – There’s not much I have to write about her really other than Alien franchise. She’s done it all. She is an incredibly talented actress who has played a wide variety of characters and continues to do so (I’m really looking forward to seeing her in Red Lights), but never was she more terrifying than Ellen Ripley.

Milla Jovovich – Again, I only need to write two words – Resident Evil. I’ve actually never seen any of those films as they don’t appeal, but after seeing her in other films, such as Joan of Ark and The Fifth Element, she should definitely be in the film in an action role. 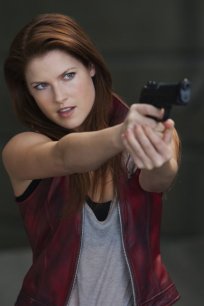 Ali Larter – This is one of my choices and there again she started off with a couple of roles where she was often running and screaming in front of the camera (Final Destination) but since then she’s portrayed a wider variety of characters. From Resident Evil, to international fame in Heroes as a fairly dark character, to a femme fatale in Obsessed. I think she would be a great addition to the action team.

Gina Torres – I only need one word this time. Firefly. If you’ve not seen the TV show, then go out and rent or buy the DVD, then watch the film Serenity. Then tell me you don’t believe that her character used to be a tough space marine and I will call you a liar. She can play big, strong, tough and intimidating, but she’s also very good at funny, sensitive and caring. A powerful on screen presence and definitely not someone you would want to upset.

Michelle Rodriguez – Just about every film role I’ve seen she has been playing someone tough and usually a cop, marine, a pilot, space marine or similar. I’m sure she is capable of playing another type of character, but in this fantasy action film of my devising, we’re after actresses who are convincing as tough characters, so she is ideally suited for this sort of film. 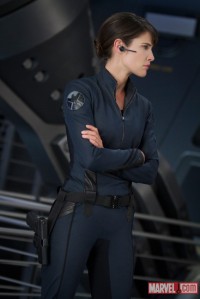 Two others I would be remiss if I didn’t mention are Cobie Smulders, who did a great turn as Maria Hill in a little film called The Avengers, and Scarlett Johansson who was also very good as Natasha Romanoff. Cobie Smulders is an interesting actress as previously when Joss Whedon was briefly attached to write and/ or direct a Wonder Woman film for DC comics, I believe his choice for Wonder Woman was Cobie Smulders. She’s extremely accomplished as a comedic actor, as her body of work in ‘How I Met Your Mother’ shows, but in The Avengers we get to see a tougher character in a position of authority.

Other names suggested include Lucy Lawless, Wei Zhao, Zhang Ziyi, Nicola Adams, Michelle Yeoh, Anne Parillaud, Zoe Saldana and Chloe Grace Moretz, although I think the latter might be a little young despite her role in Kick Ass.

So, who would you cast, and also, for a bonus point, what would be the title of the film franchise?

EDIT – It turns out this is actually happening. An all female Expendables type film is being made, as was recently reported in Variety, and Gina Carano will be in the film and most likely in the lead role. I wonder how many others listed above will appear.

One thought on “I Know Kung Fu”