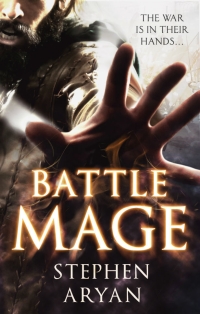 Book 1 of the Age of Darkness trilogy

BALFRUSS is a battlemage, sworn to fight and die for a country that fears his kind.

VARGUS is a common soldier – while mages shoot lightning from the walls of his city, he is down on the front line getting blood on his blade.

TALANDRA is a princess and spymaster, but the war will force her to risk everything, and make the greatest sacrifice of all.

Magic and mayhem collide in this explosive epic fantasy from a major new talent.

An action-packed and magic-fuelled fantasy novel from a British debut author, Stephen Aryan’s Battlemage features mages fighting an empire-spanning war for a homeland that fears and despises them. Shortlisted for the Morningstar Award for Best Fantasy Newcomer at the David Gemmell Awards 2016.

“This is epic fantasy for readers who appreciate extra helpings of carnage with their backstabbing.” Publishers Weekly

“Rich world-building, a willingness to be original, a vivid way with action scenes and a ready wit mean that Stephen Aryan is someone who should be well able to keep readers happily onside for the long game.” Simon Spanton, Love Reading